Funeral arrangements for Raven Gileau, the ISU student who was struck and killed by a train on April 25, will take place in her home state of Virginia. The visitation will be held from 2 to 5 p.m. on Sunday, May 2, at Mountcastle Funeral Home, 4143 Dale Blvd., Dale City, Va. The funeral will be Monday, May 3, at 11 a.m. at the funeral home. You can e-mail notes of sympathy to condolences@mountcastle.net. Please specify "Gileau family" in the subject line.

In Raven's memory, a bench will be constructed and installed at Anne Moncure Wall Park in Dumfries, Va. Donations may be made to the "Raven Gileau Memorial Fund," c/o BB&T Bank, 5844 Mapledale Plaza, Woodbridge, VA 22193. 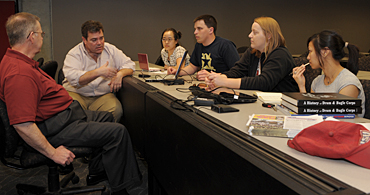