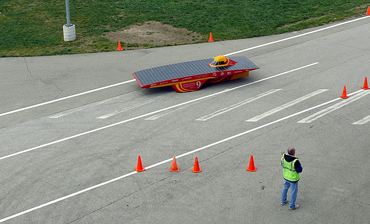 Team PrISUm had a good day at Indy on Friday, turning in 164 laps and climbing from sixth to fourth in this year's Formula Sun Grand Prix. The team is hoping for more of the same as it races to the checkered flag on Saturday.

Team PrISUm had a mixed first day at the Formula Sun Grand Prix. The team's solar race car had a good race pace, but lost hours of track time to repair a cracked frame tube. Team members expect a better day of racing on Friday.