Up all night fighting off hackers

Iowa's first High School Cyber Defense Competition will bring 12 teams from around the state to Iowa State University's Internet-Scale Event and Attack Generation Environment. The competition begins at 7 p.m. Friday, May 19, and ends at 10 a.m. Saturday, May 20. The competition is free and open to the public. 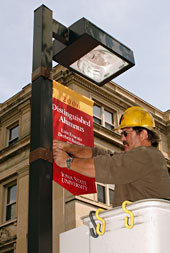 The Letterwinners Club will induct 10.