Two recent studies by Iowa State University researchers Antonio Mallarino and Matt Helmers show that phosphorus runoff into Iowa's rivers, streams and lakes can be slowed by farmers changing how they plant and fertilize their crops. The two have been studying phosphorous runoff for the past three growing seasons at two research sites that evaluate effects on runoff of tillage practices, bioenergy harvest systems, and phosphorus application using fertilizer or swine manure. 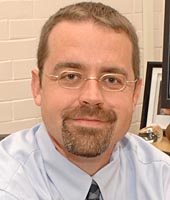