Missing teen in custody; wanted for questioning regarding assault at Iowa State

ISU Police have located a missing Woodward Academy student, 17-year-old Philip Siragusa of California, and have him in custody. Siragusa was wanted for questioning in connection with an assault that occurred shortly before 2 p.m. in the Frederiksen Court apartments on the north side of the Iowa State University campus.

A new national study led by Douglas Gentile (right), an ISU associate professor of psychology, found that parents would prefer media ratings that focus on detailed content information rather than the current age-based ratings. A national sample of 2,392 parents were surveyed by independent research firms in the study "Parents' Evaluation of Media Ratings a Decade After Television Ratings Were Introduced," which will be published in the July 2011 issue of Pediatrics.
News release.

The Hybrid Processing Laboratory located just inside the front door of Iowa State University's new Biorenewables Research Laboratory is increasingly busy. It's a place where researchers in biochemical and thermochemical sciences work together to develop technologies that produce biorenewable fuels and chemicals. And it's a showcase for the multidisciplinary work promoted by Iowa State's Bioeconomy Institute.
News release.

Three ISU Greenlee School of Journalism and Communication seniors -- Lucas Droessler, Justin Lobaito and Maria Beresnev -- won second-place in the 2011 Heineken USA/Effie Collegiate PSA Challenge for their "Tag Your Taxi" entry. The Effie Award has become a global symbol of achievement to honor marketing ideas that work. Heineken USA and Effie joined together in 2010 to create the Collegiate PSA Challenge.
News release.

Doctoral student Scott Boyken is one of 550 young scientists chosen from more than 25,000 applicants worldwide to attend a Nobel Laureate conference in Lindau, Germany, that will focus on research in physiology and medical sciences. 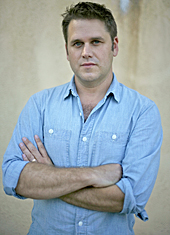 Dean Bakopoulos (above), an ISU assistant professor of English who is on the faculty of the MFA Program in Creative Writing and Environment, is author of the new book, My American Unhappiness (Houghton Mifflin Harcourt). O, The Oprah Magazine named the book the No. 1 "Title to Pick Up Now" for June, and it also earned praise in a Sunday New York Times review.
News release.

HealthDay, U.S. News & World Report
Moms and dads definitely want help when it comes to deciding whether or not a movie, TV show or video game is appropriate for their children. But, new research -- led by an Iowa State University psychology professor -- says the current rating systems aren't giving them the information they need.
See story.
Also see: Reuters, Omaha World-Herald

As a young scientist in June of 1975, James Phillips of Iowa State University helped perform an experiment that began to demonstrate a powerful new tool for determining the structures of proteins.
See story.
Loading...