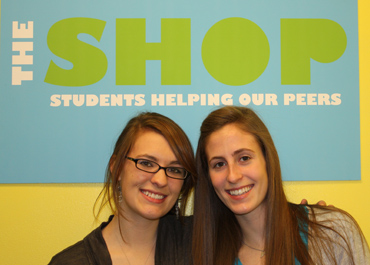 Dietetics majors Sarah Schwanebeck (left) and Hailey Boudreau are co-presidents of the student organization that will oversee The SHOP. Photo by Breanna Wetzler.

The university community is invited to donate non-perishable food items during an open house at The SHOP, 3-6 p.m. Thursday, Jan. 27, in 2616 Food Sciences Building. The SHOP (Students Helping Our Peers) is a student-run campus food pantry for students that opens Feb. 1. Bring four items to the open house and receive a T-shirt. Campus collection boxes also will be available.

When Iowa State initiated learning communities in 1995, all eyes were focused on the intended benefits for first-year students -- to improve retention, graduation rates and overall satisfaction and engagement. And, while statistics bear out significant gains in those areas, a completely unexpected benefit emerged: learning communities also transform peer mentors into leaders. More than 300 students mentor their peers in Iowa State's 84 learning communities. Many will share experiences and exchange ideas with facutly and staff coordinators at the Learning Communities January Institute, 9 a.m. to 3 p.m. Friday, Jan. 28, in the Memorial Union.
News release.

Linguist Paul Frommer, who developed the Na'vi language for James Cameron's movie, "Avatar," will speak at 8 p.m. Thursday, Feb. 3, in the Memorial Union Great Hall. Frommer developed more than 1,000 words for the fictional language, a mixture of Polynesian and African dialects, as well as the rules and structure of the language. His talk, "Giving Avatar its Voice: Creating the Na'vi Language," opens Iowa State's National Affairs Series on Innovation. It is free and open to the public.
News release.

The "Weddings in the Heartland: Apparel, traditions, memories" exhibit opened this week and runs through April 16 in the Mary Alice Gallery at the Textiles and Clothing Museum in ISU's Morrill Hall. There will be an opening reception this Sunday, Jan. 30, from 1:30 to 3:30 p.m. It contains 19 wedding garments dating from the late 19th-century to the present that display the Midwestern culture and trends of their day.
News release.

Robert V. Morris, named one of The Des Moines Register's most influential Iowans in the 21st century, will discuss his new book, "Black Faces of War: A Legacy of Honor from the American Revolution to Today," at 7 p.m. Wednesday, Feb. 2, in the Memorial Union Sun Room. His illustrated history relays personal accounts of several prominent African-American war heroes. Morris founded the Fort Des Moines Memorial Park and the World War II Iowa Tuskegee Airmen Memorial at the Des Moines International Airport. His talk is free and open to the public.

Iowa State University-based shrimp research by Hank Harris, professor in animal science, has led to an international licensing and marketing agreement for two vaccines to be used in shrimp farming around the world.

A new study by an international research team -- including Douglas Gentile, an ISU associate professor of psychology -- found further evidence that video game "addiction" exists globally and determined the risk factors for becoming pathological gamers, as well as the outcomes of that addiction. The study will be published in the February 2011 issue of Pediatrics -- the journal of the American Academy of Pediatrics - and has been posted online.
News release.

Comics artist and author Scott McCloud will discuss the medium and art of comics during a talk on Thursday, Jan. 27. "Comics: An Art Form in Transition," will be at 8 p.m. in the Memorial Union Great Hall. Since creating "Zot!" in the 1980s, McCloud has become well known for his print and web comics. He is the author of "Google Chrome," "Understanding Comics," "Reinventing Comics" and "Making Comics." McCloud's theories have been infuential in game, Web and interface design, and he has been a consultant to The National Cancer Institute and The Xerox Palo Alto Research Center among other clients. His presentation is Iowa State's annual Goldtrap Lecture and is free and open to the public.
News Release.

Textile artworks, watercolors and traditonal Chinese brush paintings by faculty from Lanzhou Jiaotong University (LZJTU) in Lanzhou, China, will be on display at the College of Design from Jan. 31 through Feb. 16. The exhibition will open with a reception from 5 to 7 p.m. Monday, Jan. 31, in the college's Gallery 181 and Lightfoot Forum. The program will include a ceremonial signing of an expanded agreement between Iowa State and LZJTU.
News release.

RELATED STORY: "Is This Hoiberg Guy for Real?" in The Wall Street Journal

A group of South Carolina lawmakers stood on the steps of their state Capitol on Wednesday to encourage Mike Pence, R-Ind. -- who represents part of the Cincinnati metropolitan area -- to run for president. Steffen Schmidt, a political blogger and a political science professor at Iowa State University, says Pence's name has been on people's lips in Iowa.

The Chronicle of Higher Education
Phillip B. Caffrey had never seen such an avalanche. During the final weeks of 2009, a record number of applications had buried Iowa State University's admissions office. Staffers were working late, but each day brought another load.
See story.

How product placement is about to transform British TV

Product placement will be allowed on British television programs for the first time next month, and some fear our viewing will never be the same. "Done subtly, holding a bottle of branded beer is hardly noticeable," says Professor Jay Newell, an advertising expert at Iowa State University.

KCCI-TV
Potential candidates are starting to test the waters, but political experts -- such as Dianne Bystrom, director of Iowa State's Carrie Chapman Catt Center for Women and Politics -- said there is not nearly the activity in Iowa as there was leading up to the 2008 presidential race.
See story, video.

Michael Bugeja, director of the Greenlee School of Journalism and Communication at Iowa State, authors an opinion piece that explores the current state of journalism education in this brave, new media world.

Reuters
There might be trouble brewing behind the glassy eyes of kids who spend too much time and energy on video games, according to a controversial new study.Excessive gaming appeared to cause additional mental woes according to Douglas Gentile, who runs the Media Research Lab at Iowa State University in Ames and worked on the study.
See story.
Also see stories by: The New York Times, The Des Moines Register, CNN.com, HealthDay News, The Canadian Press, Minneapolis Star Tribune, Bloomberg News, The Gazette (Cedar Rapids), Futurity, and FOX News Boston

Why loneliness is hazardous to your health

Everyone knows what it's like to be lonely. And it seems to be that it's the subjective experience of loneliness that's important for people's well-being, rather than any objective measure of social connectivity. It's an important distinction that most previous studies had ignored, says Daniel Russell, a psychologist at Iowa State University in Ames.