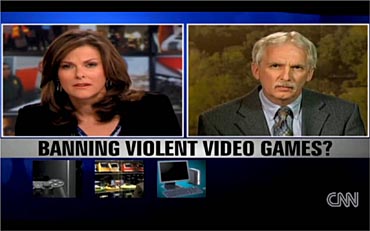 ISU psychology professor Craig Anderson (at right) appeared on CNN with Campbell Brown back in April when the Supreme Court announced that it would hear the case.

When the U.S. Supreme Court hears a case this fall brought by the State of California vs. the video game industry concerning a proposed law to prohibit the sale of violent video games to minors without parental consent, the justices will likely consider research by Iowa State University psychologists -- including Craig Anderson and Douglas Gentile.
News release.

David Sugden, professor of special needs in education at the University of Leeds (U.K.), will present the Pease Family Scholar lecture on Thursday, Sept. 23, at 8 p.m. in the Memorial Union Sun Room. His free, public lecture, titled "Identifying, Assessing, and Supporting Children with Movement Difficulties," will address the challenges faced by children with movement disorders.
News release.

Iowa State is leading a research collaboration of six participating schools in the TEACH MATH project, which was awarded a five-year, $3.5 million grant by the National Science Foundation. The project is designed to improve preK-8 mathematics teaching and student learning in the nation's increasingly diverse public schools. Corey Drake (at right), an ISU associate professor in curriculum and instruction, is the grant's principal investigator.
News release.

Iowa State keeps an eye on 2050 in new strategic plan

Becoming a world leader in "advancing the land-grant ideals of putting science, technology and human creativity to work" is Iowa State's task under its new strategic plan, approved Sept. 16 by the Iowa Board of Regents.

ISU engineering, business and liberal arts career fairs will go on under tents next week

Despite flood damage to Hilton and Scheman, Tuesday's Engineering Career Fair and Wednesday's Business and Liberal Arts and Sciences Career Fair will go on as planned under large, air-conditioned tents with walls and floors. The events will take place in the courtyard on the south side of Scheman from noon to 6 p.m. each day.
News release.

Bill McKibben, described as the "world's best green journalist" by Time Magazine, will lecture at Iowa State as part of the Pesek Colloquium on Sustainable Agriculture. He will speak on "Sustaining Life on a Tough New Planet," which parallels his most recent book, "Eaarth: Making Life on a Tough New Planet." His presentation will be at 8 p.m. Thursday, Oct. 14, in the Memorial Union Great Hall. It is free and open to the public. The annual Pesek Colloquium presents lectures on sustainable agriculture, and encourages discussion and community response.
News release.

Four candidates for ISU's College of Veterinary Medicine dean post will visit campus Sept. 20-Oct. 1. Each candidate will participate in an open forum. Candidate information and interview schedules are available on the executive vice president and provost's website.

In 1996, when Ingrid Lilligren was a junior faculty member in ISU's art and design department and Jill Euken worked as an Extension field specialist, they collaborated on a project to create artwork for the new Wallace Foundation Learning and Outreach Center. Little did they know that this "beginning of a beautiful friendship" would lead to a partnership between the Bioeconomy Institute and the College of Design nearly 15 years later. Now the institute's new Biorenewables Research Laboratory will not only be home to some of the university's most innovative research, but also some of its most inventive artwork.
News release.

Aldo Magazzeni, who organizes volunteer community service projects around the world, will speak at 8 p.m. Monday, Oct. 4. His presentation, "Roads to Activism: Traveling Mercies in Afghanistan, Kenya, Haiti and Mexico," will be in the Memorial Union Great Hall. Traveling Mercies' efforts are in remote, isolated areas but have far-reaching impact on those served. The event is part of the World Affairs Series at Iowa State. It is free and open to the public.
News release.

While Iowa's pesky mosquitoes are more common during the hotter, wetter days of midsummer, Iowans should continue to be vigilant about protecting themselves from the bug's bites during the drier fall season. Lyric Bartholomay, assistant professor of entomology, says now is when the types of mosquitoes that carry the more dangerous viruses are breeding and looking for food.

Environmental philosophers will lead town meeting on ethical action for a planet in peril on Sept. 29

Two environmental philosophers -- both noted authors -- will lead a discussion on the importance of taking personal and moral responsibility for the planet during a town meeting at Iowa State on Wednesday, Sept. 29. "Moral Ground: A Town Meeting on Ethical Action for a Planet in Peril" with Michael Nelson and Kathleen Dean Moore will be at 7 p.m. in the Memorial Union Sun Room. The event is part of the Live Green! Sustainability Series at Iowa State. It is free and open to the public.

Iowa State University's new Biorenewables Research Laboratory is putting researchers from across campus under one roof. One result of the $32 million state investment is faster-moving science and engineering. This video from the College of Engineering takes you inside.

Mix, but do not shake:

Enjoy the blog and the adventure of the Savanna Traveling Studio, a landscape architecture learning community. Fall semester includes two, three-week road trips. The first trip is to Minneapolis, the Badlands, Black Hills, Yellowstone, Grand Tetons and Denver; the second heads down the Mississippi to the Gulf of Mexico.