Iowa State's Robert Brown, left, talks biofuels with Don Gonyea, national political correspondent for NPR. The radio network is expected to air a Gonyea story about ethanol and presidential politics this weekend. Gonyea is also working on a feature story about Iowa as an early state in the presidential-selection process. That story should run later in the summer. Brown is an Anson Marston Distinguished Professor in Engineering and Iowa Farm Bureau Director of the Bioeconomy Institute. Brown told Gonyea that discussions of ethanol should really be discussions of American agriculture and energy security.

Fountains get some TLC

The Fountain of the Four Seasons, one of the most beloved landmarks on the ISU campus, has been noticeably dry this spring. It is one of several Christian Petersen art works getting some love from fine art conservator Francis Miller this month. Miller will conserve three of Petersen's fountain sculptures and a selection of studio sculptures.
Inside Iowa State story.

Terry Besser, an Iowa State professor of sociology in the College of Agriculture and Life Sciences, is leading the project.

Iowa State sociologist Terry Besser is leading a four-university project that has identified 12 rural communities (populations of 10,000 or fewer) that are "new destination towns" in Iowa, Kansas and Nebraska -- experiencing a significant increase in Hispanic population in the last two decades. They matched these towns with six similar towns that have no growth in Hispanic population in two reports profiling those communities, their amenities and some of the keys to their economic vitality.
News release.

James Vary and Pieter Maris, Iowa State University physicists, have discovered the reasons behind the unexpectedly slow decay of carbon-14. That slow decay makes it possible for scientists to use carbon dating techniques to accurately date the relics of history. Understanding the decay of carbon-14 could also help researchers unravel other mysteries of matter. The physicists' findings were recently published online by the journal Physical Review Letters.

Researchers at Iowa State University and elsewhere are working to restore native Iowa prairies that once covered almost the entire area between the Missouri and Mississippi rivers and have now shrunk to less than 1 percent of the landscape. Restoring those prairies, while maintaining Iowa's agricultural productivity, is the goal of Diane Debinski, professor of ecology, evolution and organismal biology. 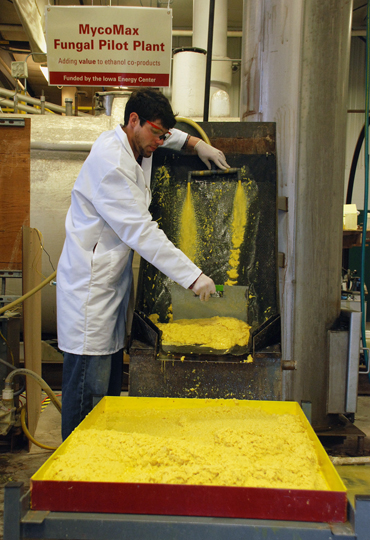 Los Angeles Times
Product placement - the practice of inserting merchandise into entertainment for publicity value - is not only alive and well, but thanks to innovations such as DVR technology, which allows viewers to skip traditional commercials altogether, it's a bigger business than ever. Jay Newell, an associate professor at Iowa State University who studies product placement, also cites cognitive rejection as shaping the approach to product placement.
See story.
Loading...