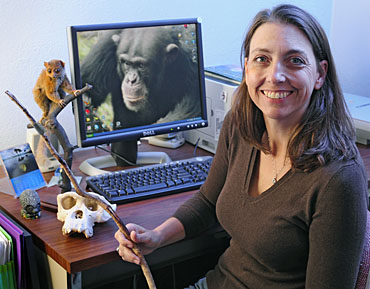 Jill Pruetz (above), an Iowa State associate professor of anthropology, is a guest during the second hour of National Public Radio's "Talk of the Nation" program on Thursday, Jan. 6, starting at 2 p.m. Iowa time. It can be heard on Iowa Public Radio (locally, WOI-AM, 640), and through the show's NPR website. The segment is titled, "Exploration in the 21st Century: What's Left to Explore?" and will be broadcast live from the stage of National Geographic's Grosvenor Auditorium in Washington, D.C.
News release.

Iowa State University is among the 100 top values in public higher education, according to Kiplinger magazine. Iowa State is 80th on the Kiplinger list. The ranking, released Jan. 4, considers admission and graduation rates, average cost per year, average need-based and non-need-based financial aid, and average debt at graduation. Kiplinger says the 100 schools "deliver a stellar education at an affordable price."

A report authored by researchers at Iowa's three public universities says climate change is already affecting the way Iowans live and work. Legislation approved in April 2009 asked university researchers to study the effects of climate change on Iowa and report back to the governor and the Legislature. The report makes seven policy recommendations that begin to protect the state's economy, environment and residents from changes in climate.
News release.

Iowa State's undergraduate landscape architecture program tied for eighth in the nation, according to a new survey of practitioners by DesignIntelligence, a bimonthly publication for leaders in design professions. The magazine's annual report, "America's Best Architecture and Design Schools," is the only national college ranking survey that focuses exclusively on design. There are 47 accredited landscape architecture programs in the U.S.
News release.

Hui Hu, an Iowa State University associate professor of aerospace engineering, is working with engineers from the Goodrich Corp. to test and characterize the next generation of fuel nozzles. The joint project is supported by a $78,305 grant from the Grow Iowa Values Fund, a state economic development program.
News release.

Graphic Design Associate Professor Lisa Fontaine's Exhibition Design class has worked with the Field Museum exhibition design director for the past two semesters. This semester her students worked on designs for a traveling exhibit on ants. Iowa State is one of only a handful of schools in the country that teach the art and science of designing exhibits that communicate, educate and entertain in museums and trade shows throughout the world.
News release.

Madeleine Henry (above), a world languages and cultures professor and chair of the classical studies program, co-edited a new book, "Greek Prostitutes in the Ancient Mediterranean, 800 BCE-200 CE," which is being released this month. It provides rare insight into some of the earliest prostitution from arguably the world's oldest profession.
News release.

Angie Hunt of KCCI-TV interviews Iowa State researchers about a report on climate change they helped prepare for Iowa lawmakers.

Kansas City Star
Welcome to the "adhocratic" work force. It describes an evolution in the job market: As the economy recovers from the recession, more and more workers in the 2011 labor force will be hired on an ad hoc basis, teaming up in work groups created for a specific reason for a specific period of time. And Brian Mennecke, a management information systems professor at Iowa State University, says we'll see more of that because of technology.
See story.

The search for better nozzles

Automakers aren't the only ones looking to increase fuel efficiency and decrease emissions. Aircraft manufacturers are facing similar requirements, and they're using high-tech gadgetry to help them meet those goals.
See story.

Ethanol gets a boost; Will it return the favor?

National Public Radio
The EPA forces fuel blenders to use billions of gallons of ethanol a year. And there's also a high tariff on imports - giving ethanol triple support. But according to the ethanol industry ads, the payback is huge. David Swenson, an Iowa State University economist, doesn't agree on the industry's job claims.
See and hear story.