National food security experts from USDA and FDA will be featured at the first annual symposium of ISU's Institute for Food Safety and Security, April 19. They will present strategies for science-based risk analysis, decision making and communication in the areas of food safety and security.

Fast action by staff and a handy defribrillator saved professor Clyde Walter when he suffered a heart attack during a pickup basketball game on campus.

Stars Over Veishea: 'My Fair Lady'

"My Fair Lady" is this year's Veishea celebration production. ISU Theatre and the music department will partner with Stars Over Veishea on the musical, which will be presented April 21-22. 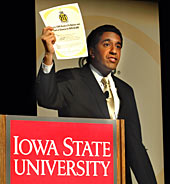