Alex Travesset reports in the Oct. 14 issue of the journal Science that nanotechnology has entered a new era. Because of developments in nanoparticle self-assembly, designer materials with unique properties are now possible. And that could lead to immediate applications in catalysis, medical sensing and optics.
News release.

ISU apparel students Kaitlyn Clevenstine (left) and Marian Baggenstoss (right) apply the finishing touches to a dragonfly costume that will be worn by student dancer Laura Carr during the "Spirits in the Gardens" program.

Iowa State apparel students created six costumes depicting insects that will be worn by ISU student dancers as they perform for children during the "Spirits in the Gardens" program at Reiman Gardens on Saturday and Sunday, Oct. 29-30, from 4-7 p.m. Kids can also collect candy, enjoy craft stations, play games and hear tales from a story teller at the Halloween event, which is free for children 17 and under.
News release.

Hira to retire as ISU College of Business dean; will remain on faculty

Labh Hira, who is in his 11th year as dean of the College of Business at Iowa State University, has announced that he will retire as dean when his term ends on June 30. He will remain on the ISU faculty as a professor of accounting.
News release. 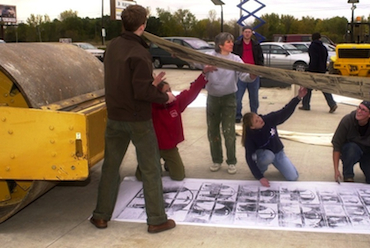 In the two years since the journal Science published an article by ISU's Adam Bogdanove about his groundbreaking gene research, scientists around the world have built on those findings to explore further breakthroughs. Now Bogdanove updates the scientific community on where the research has been since 2009 and where it is heading.

The groundbreaking ceremony for Troxel Hall, Iowa State University's newest classroom auditorium, will be held Friday, Oct. 21, at 4 p.m. The ceremony will be held on Farm House Lane between Agronomy Hall and the Horticulture Greenhouse Complex.

On a recent trip to Ghana to finalize the Dietetics Internship details, Erin Bergquist, (left); Jean Anderson, (middle, kneeling); and Grace Marquis (back right) met with representatives from the University of Ghana.

Iowa State University's Dietetics Internship program, already the country's largest, will be the first in the nation to offer an international component. ISU interns will have the option of working in Ghana beginning in January.

As long as Iowa continues to host its first-in-the-nation caucuses -- allowing Iowans to cast the first votes in the presidential nominating process every four years -- Iowa State University faculty will have a front row seat to the campaign. Three ISU political scientists discuss that rare inside view and the unique opportunity it presents them in their research and teaching.
Presidential campaign site.

Iowa State University researchers helped design and build the $20 million instrument that allowed astrophysicists to discover the first very-high-energy gamma rays from a pulsar. The discovery is reported in the Oct. 7 issue of the journal Science.
News release.

The Nobel Foundation today announced Dan Shechtman of Iowa State University, the U.S. Department of Energy's Ames Laboratory and Israel's Technion has won the 2011 Nobel Prize in Chemistry. The foundation announced The Royal Swedish Academy of Sciences picked Shechtman "for the discovery of quasicrystals."

Campaign news coverage will be the focus of the Greenlee School Futures Forum at Iowa State on Thursday and Friday, Oct. 20-21. Sponsored by ISU's Greenlee School of Journalism and Communication and its advisory council, the forum will take place in the Memorial Union and include events that focus on political journalism, communication and advertising. It is free and open to the public and will feature local, state and national journalists, communicators and political experts.
News release.

A search committee has identified five finalists for the next dean of ISU's College of Liberal Arts and Sciences. The finalists will interview on campus Oct. 24 through Nov. 7.

The Network Against Human Trafficking and Iowa State University are teaming up to present the first Iowa Conference on Human Trafficking in ISU's Memorial Union on Wednesday, Oct. 26, from 8 a.m. to 5 p.m. Bonnie Campbell, a former attorney general of Iowa; and Francis Bok, who was trafficked as a child soldier in the Sudan, will be the keynote speakers.
News release.

Report is too quick to write off biofuels

The Des Moines Register
A recently released National Academy of Sciences report concludes that advanced biofuels made from cellulosic biomass (crop residues, grasses, and wood chips) will not be economically feasible without heavy subsidies or high petroleum prices. While the report is correct in concluding that advanced biofuels are not sufficiently developed to immediately make significant contributions to the supply of transportation fuels, the report is flawed in concluding that no biofuel pathway has prospects for standing on its own without heavy government support.
See essay by Robert C. Brown and Tristan Brown.

Marketplace Morning Report
Florida has moved next year's Republican presidential primary to late January, putting it ahead of other traditionally early caucus and primary states. But the financial benefits may be exaggerated. In 2008, Iowa State University economist Dave Swenson figured he'd measure Iowa's windfall that year. When he looked closely at what campaigns were spending, he was underwhelmed.
See story.
Loading...