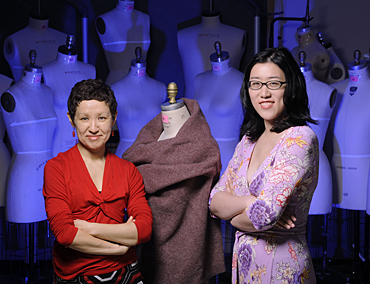 Elena Karpova (left) and Juyoung (Jill) Lee (right) -- an assistant professor and graduate student in ISU's apparel, educational studies and hospitality management respectively -- co-authored a new study finding that the U.S. apparel industry's "fast fashion" focus has resulted in diminishing returns on its market shares both at home and abroad. The study appears in the latest issue of the Journal of Fashion Marketing and Management, which was published earlier this month.
News release.

Abhijit Rao (standing), director of the College of Business Communication Center, and Tim Killian, one of the center's consultants, work with some students during a consulting session.

Iowa State's College of Business Communication Center has seen its role to improve student communication expand since it was founded in 2005. Just this year, it became a year-round, full-service center for students. In the process, the number of student consultations has grown from 114 in the first year it opened to 1,145 in this year's fall semester alone, according to Abhijit Rao, center director.
News release.