Cake-batter ice cream out of the lineup

The ISU Dairy Science Club will play it safe during the university's 150th birthday kickoff Saturday (April 21) by replacing its cake-flavored sesquicentennial ice cream with vanilla with cardinal and gold sprinkles. Servings of chocolate, plain vanilla, strawberry, Oreo and Snickers also will be served.

Iowa State researchers built the four cameras for the VERITAS telescope system in Arizona. The new $20 million telescope system detects gamma rays and will help astrophysicists explore distant regions of space, look for evidence of dark matter and help explain the origins of the most energetic radiation in the universe.

Professors William Dilla, Diane Janvrin, and Cynthia Jeffrey will be conducting an online investing simulation Saturday in the Gerdin Business Building, just east of the Sesquicentennial Veishea Village on central campus. The simulations will take place during 30-minute sessions that run every half-hour from 12:30 until 4 p.m.

Statement from President Gregory Geoffroy in regard to Virginia Tech tragedy

Iowa State artist: When it comes to inventing furniture, I fold

The Iowa State Women's Rugby club is teeming with confidence as it prepares to travel to Sanford, Fla., to take part in the USA Rugby Women's Collegiate National Championships April 21-22.

John Hauptman, an Iowa State University professor of physics and astronomy, is leading an international team that's designing a detector for the proposed International Linear Collider. The collider would be about 19 miles long and accelerate electrons and positrons to nearly the speed of light. The particles would collide at the center of the machine at extremely high energies. Collider detectors would record those collisions. Physicists expect the collisions to create new particles and help them understand how the universe works.

Iowa State's nationally ranked paintball team is going to the College Paintball National Championships to be held April 20-22 in Dallas. 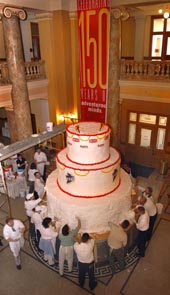 Iowa State will kick off a year-long celebration of its 150th birthday with a 20,000-piece birthday cake that will be served at Beardshear Hall the afternoon of April 21.

Fittingly, the kickoff for Iowa State's year-long birthday celebration begins at Veishea, one of ISU's oldest traditions. Here's what you need to know about the exhibits, fun foods, parade route, kid-friendly stops and more.

Guide to the 150th kickoff.

Savannah chimpanzees, which can make weapons to hunt other primates for meat, can also seek refuge in caves, much like our earliest human ancestors, according to new findings by Primatologist Jill Pruetz at Iowa State University.