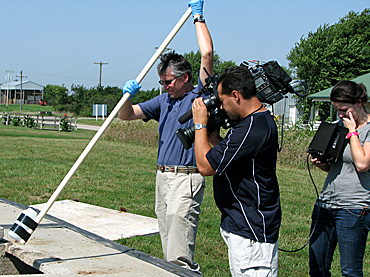 Tune to H2 Monday to get a whiff of ISU experts

Modern Marvels is one of the network's most popular and enduring programs and Monday's episode will explore how people deal with offensive odors.

Jacek Koziel, associate professor in Agricultural and Biosystems Engineering, and Stephanie Hansen, assistant professor in the Department of Animal Science, were both interviewed for the show.

Two Iowa State sociology professors -- David Peters (left) and Andy Hochstetler (right) -- have been awarded a $225,428 National Institute of Justice grant in collaboration with the Iowa Department of Corrections to study prisoner reentry in Iowa. The researchers have begun their analysis and plan to assess the quality and appropriateness of rehabilitation treatment received by the inmates in predicting their chances of becoming repeat offenders.

Campus and community celebrations and two notable speakers are among Iowa State's activities to honor the life of Martin Luther King Jr., Nobel Peace Prize winner and civil rights activist. Iowa State's Martin Luther King Jr. Holiday Celebration, featuring music and speakers, is set for 4 p.m. Thursday, Jan. 19, in the Memorial Union. On Jan. 26, the documentary, "Black American Gothic," looks at the urban migration from Chicago to Iowa City. And on Feb. 2, NBC correspondent Touré will discuss his book, "Who's Afraid of Post-Blackness." All events are free and open to the public.

Two Iowa State University researchers have been awarded a $225,000 grant to study factors that lead to inmates becoming repeat offenders.

Biofuels Digest
Iowa State University's Robert C. Brown is No. 59 on Biofuels Digest's top 100 list. "That one of the most comprehensive and compelling biofuels research centers is based in Iowa is not entirely surprising, but it's still an impressive array of research on both first- and second-generation biofuels."
Loading...