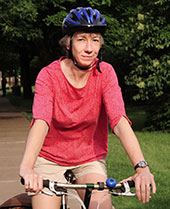 Cyclone student athletes, coaches and staff spent a day helping clear debris in Parkersburg, where an EF5 tornado left a path of destruction May 25.