When the Skunk River Navy students slogged down river on their annual cleanup patrol this fall, they weren't looking for trash. They were looking for art. The Skunk River Navy is a service project in Iowa State's freshman biology learning community. And this semester they added new dimensions to the annual trash patrol: Design freshmen, student artwork and a commissioned sculpture all created from the collected trash.

Iowa State commencement will be Dec. 17

An anticipated 1,650 students will be awarded degrees during a single commencement ceremony at 2 p.m. Saturday, Dec. 17, in Hilton Coliseum. Ben Allen, president of the University of Northern Iowa, will receive an honorary degree. The commencement ceremony will be Gregory Geoffroy's final one as president of the university. Tickets are not required.

After being mute, Iowa State University graduating senior speaks with a new voice

Iowa State graduating senior Kevin Neff will share his inspirational story Friday when he speaks to fellow College of Business graduates. And he will speak with a new voice. For three-and-a-half years, Neff had no voice. And while some would say his vocal cords were silenced by a freak of nature and cured by a fluke of healing, Neff believes it all happened for a purpose.

Malika Jeffries EL, an Iowa State assistant professor of chemistry, is part of the first class of chemists to receive the WCC Rising Star Award from the Women Chemists Committee of the American Chemical Society. The committee said the award recognizes exceptional mid-career chemists and is designed to promote the retention of women in scientific careers.

Lauren Sullivan, an ISU doctoral candidate, is one of 40 students nationwide selected as a TogetherGreen fellow from The National Audubon Society and Toyota earning $10,000. The award will go toward a community project to engage local residents, contribute to environmental health and conserve land, water, and energy. Sullivan earned the fellowship through her work restoring a four-acre corn plot (located west of the corner of Ontario and Hyland in Ames) back to native prairie.

Iowa State University engineers are using wind tunnel tests to study how hills, valleys and the placement of wind turbines affect the performance of wind farms. While the wind power industry has data about offshore turbine performance over flat water, there's little information about the effects of uneven ground on wind turbines and their power production.

Authors Ben and Jen Percy (above) are believed to be the first brother-sister siblings to each be awarded a $25,000 Literature Fellowship in Creative Writing (Prose) by the National Endowment for the Arts in the same year. An assistant professor of English at Iowa State, Ben just sold the film rights for his first novel, "The Wilding," and is authoring the screenplay. Jen is a graduate of the University of Iowa's Nonfiction Writing Program and is now a Truman Capote Fellow at the Iowa Writers' Workshop. 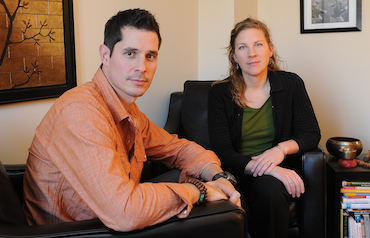 When Howard Tyler joined the faculty at Iowa State University 20 years ago, he felt well prepared for most aspects of his job. But the first time a student in the throes of an emotional crisis walked into his office, he knew he had a lot to learn. That's why Tyler -- now an associate professor -- was among the first to sign up for the ISU Student Counseling Service's new Mental Health First-Aid training. The 12-hour session teaches faculty and staff a set of action steps for helping a distressed student until appropriate treatment and support are received.

Brian Mennecke, an ISU associate professor of management information systems, has been studying trends in advertising and social media and the use of facial and body recognition technologies in digital signage displays and product marketing. He foresees facial recognition technology creating new "marketing avatars" -- which he calls "mavatars" -- to be used by savvy business marketers in the not-too-distant future.

Beate Schmittmann will become the next dean of the College of Liberal Arts and Sciences at Iowa State on April 2, 2012. Schmittmann has been a member of the physics faculty at Virginia Tech University, Blacksburg, since 1991 and department chair since 2006. A distinguished computational physicist, she was a leader in Virginia Tech's ADVANCE grant from the National Science Foundation to increase both the participation and professional advancement of women in science and engineering fields in higher education.