Iowa State University researchers have contributed to the release of the annotated genome of one of the most destructive nematodes: Meloidogyne incognita -- the southern root-knot nematode, as reported recently in the journal Nature Biotechnology.

A ceremonial groundbreaking for Hach Hall, Iowa State University's newest chemistry facility, will be held at 11 a.m. on Saturday, Sept. 6, on the northwest side of Gilman Hall. Kathryn Hach Darrow of Mukilteo, Wash., the lead donor to the project with a $10 million commitment, will be speaking at the event.

Author and Pulitzer Prize-winning reporter Sonia Nazario will speak on "Enrique's Journey and America's Immigration Dilemma," at 8 p.m. Tuesday, Sept. 23, in the Memorial Union Sun Room. The event is free and open to the public.

Adrienne Rich, writer, award-winning author, poet and feminist icon, will speak at 8 p.m. Monday, Sept. 25, in the Memorial Union Great Hall. The event is free and open to the public. 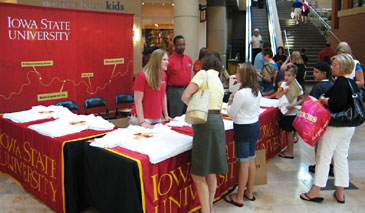 Iowa State was the main sponsor of "The Scene" in Jordan Creek Town Center in West Des Moines last weekend. ISU's Admissions crew (and Cy) gave away T-shirts and applied tattoos at the back-to-school event.