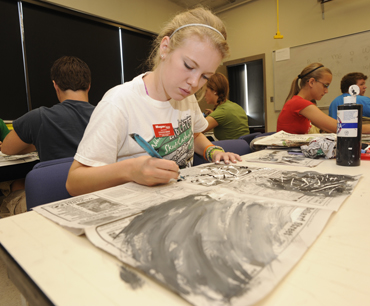 They're learning how to sketch a sound, draw digitally, distinguish shape and form and the meaning of studio culture. For two weeks in July, the 16 high school students from Iowa, surrounding states and Puerto Rico are "camped out" at Iowa State University's "Design Condensed." It's the first time the College of Design has offered a summer design camp.
News release.

Weekend storms destroyed at least 20 large trees on campus and damaged limbs on others, like this tree near Carver Hall. Chris Ahoy, associate vice president for facilities, said Campus Services staff worked Sunday to clear sidewalks and roadways, and that work will continue over the next few weeks. No personal injuries were reported. ISU's Veenker Memorial Golf Course sustained significant tree damage in the July 18 storm; 70 trees were affected and 40 were destroyed, according to Golf Course Superintendent John Newton. Officials plan to reopen Veenker on July 20.

Because writing was a therapeutic outlet while dealing with her own disabilities, ISU Distinguished Professor of English Mary Swander (photo right) has made it part of her platform as Iowa's poet laureate to bring awareness to people with disabilities and offer them creative outlets through writing. That's why she helped establish "Writing Through Change" -- a six-week, noncredit ISU online creative writing course for Iowans with disabilities.
News release.

Ames ranked one of the best places to live in America

The Ames/ISU community has made MONEY magazine's top 10 list of the best places to live in America. Ames, ranked No. 9, has "jobs galore" and a "welcoming vibe," says the magazine.

These threats aren't unique to Gombe; they also threaten chimpanzees in other parts of Africa, including those studied by primatologist Jill Pruetz of Iowa State University.
See story.