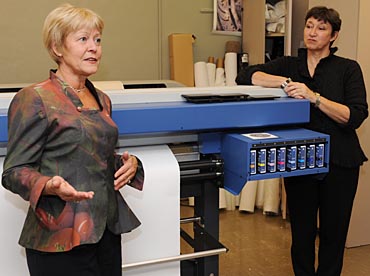 Ryan Atwell, a recent ISU graduate with a doctorate from the Department of Natural Resource Ecology and Management, is among the newest group of AAAS Science & Technology Policy Fellows. Atwell works for the U.S. Forest Service, Office of Research and Development, which is a division of the Department of Agriculture.

Richard S. Swanson, president and CEO of the Federal Home Loan Bank of Des Moines, is the fall 2009 speaker for the Robert Stafford Lecture Series on Banking in Iowa State University's College of Business.
News release.

University Book Store will apply a $300,000 award from the U.S. Department of Education toward the launch of a textbook rental program at Iowa State.

Learning Design Solutions (LearnDS) is a new enterprise founded by curriculum and instruction graduate students that grew out of work being done in their advanced instructional design class. The seven student instructional designers and three faculty advisors propose innovative uses of technology to facilitate learning and support effective teaching for their clients.
News release.

Associated Press
Mark Widrlechner is out to save a species from extinction. It's the native ash tree, and although it provides $25 billion worth of timber and decorates backyards across North America, an unstoppable bug has slowly killed millions of trees in 13 states and could cause the species' ultimate demise - unless Widrlechner, an Iowa State professor, is successful.
See story.

U.S. News & World Report
A family, school and community intervention program improved children's eating and exercise habits and reduced the amount of time they spent in front of the television, an Iowa State study has found.
See story.
Loading...