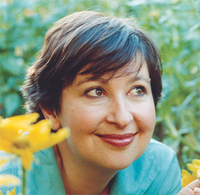 Iranian author and humorist Firoozeh Dumas will speak at Iowa State on Monday, March 8. Her talk, "Laughing Without an Accent," will be at 8 p.m. in the Memorial Union Great Hall. Dumas is the author of two memoirs, "Funny in Farsi" and "Laughing Without an Accent." She was a finalist for the prestigious Thurber Prize for American Humor, the first Middle Eastern woman to be considered for this honor. Her talk, part of the university's and community's International Women's Day Celebration and Women's History Month, is free and open to the public.

A new national study by Iowa State researchers Warren Blumenfeld and Robyn Cooper has found that one out of every two lesbian, gay, bisexual, transgender (LGBT) and allied youths are regular victims of "cyberbullying," which causes psychological and emotional distress to victims -- producing thoughts of suicide in some who are repeatedly victimized.
News release.

Dr. Sinisa Grozdanic has developed two new methods to detect glaucoma in dogs at an early age, long before the dogs show any signs of the disease. The early detection should allow dog owners to make better breeding decisions and allow for earlier treatment of the disease.

Scott Nelson, assistant professor of biochemistry, biophysics and molecular biology at Iowa State, has been awarded a $356,000 grant from the Roy J. Carver Charitable Trust, Muscatine. Nelson will study the molecular mechanisms of DNA replication and repair, which could lead to more effective cancer treatments.

Jack Payne, vice president for extension and outreach at Iowa State University since 2006, has accepted a position at the University of Florida, Gainesville. Executive Vice President and Provost Elizabeth Hoffman has appointed Gerald "Jerry" Miller, longtime faculty member and administrator at Iowa State, as interim vice president for extension and outreach, effective June 1.

Kerry Whisnant, an Iowa State University professor of physics and astronomy, will present a paper about his formula to predict baseball success to the Massachusetts Institute of Technology's Sloan Sports Analytics Conference in Boston on March 6. Whisnant says his work in sabermetrics, the analysis of baseball statistics, is a hobby he'd love to turn into a part-time job for his favorite big-league team.
News release.

The Pulitzer Prize-winning investigative journalist who broke the 2004 Abu Ghraib prison scandal will speak at Iowa State about "The Crisis in American Foreign Policy." Seymour Hersh will speak at 8 p.m. Tuesday, March 9, in the Memorial Union Sun Room.

Hersh earned the 1970 Pultizer Prize for International Reporting for exposing the Vietnam War My Lai massacre and cover-up. He is the author of eight books and has been a regular contributor to the New Yorker since 1993. The talk, part of the World Affairs Series, is free and open to the public.

Terry Childers, the Dean's Chair in marketing at Iowa State, is planning construction of a new lab in the Gerdin Business Building -- believed to be the first of its kind among business colleges nationally -- to study brain waves of consumers as they make purchasing decisions.
News release.

The Iowa State University Turf Club won first place at the 2010 Collegiate Turf Bowl Competition at the annual Golf Course Superintendents Association of America's education conference on Feb. 11. This is the eighth time the team has won the competition over the past nine years. Iowa State competed against 67 teams from 31 colleges and universities.

The parents of misssing ISU student Jonathan Lacina are offering a reward of up to $10,000 for any new information that leads to the location of their son. Anyone with information pertaining to the search for Lacina should call ISU Police at (515) 294-4428 or the Ames Police Department at (515) 239-5133.

This year, the Iowa State Alternative Break program is sponsoring three trips. Volunteers will visit one of the designated sites located in Ohio, West Virginia and Texas. News release.

ISU agronomy graduate student Massiel Orellana is grateful to know her family is Chile is safe following Saturday's massive earthquake, but worries about her country's recovery.

Des Moines Business Record
This battery would make the Energizer Bunny hang his head and shut it down for the night. But we're not talking about the double-A batteries in your TV remote. We're talking a much different type of battery of a much different size. Think bigger. Much bigger. The size of a large building big.
See story.

The Des Moines Register
Local artist Keith Sandvig has been commissioned by the Iowa State Gridiron Club to create a drawing representing the Cyclones' 2009 season, which climaxed with the Insight Bowl win. Sandvig also is an ISU football dad.