Iowa State researchers Gregory Welk (above) and Michelle Ihmels have developed the Family Nutrition and Physical Activity Screening Tool to identify children who may be predisposed for becoming overweight or obese before they are classified that way through their body mass index readings.
News release.

ISU's College of Human Sciences and Teacher Education Program will host "Partnering for Student Success: A School and University Conference on School Partnerships" on Tuesday, Sept. 14, in the Memorial Union, from 9 a.m. to 3 p.m. Sarah Brown Wessling (at left), a Johnston High School teacher and ISU alumnus who was named 2010 National Teacher of the Year, is one of the keynote speakers.
News release.

Iowa State University's fall 2010 enrollment of 28,682 students is a record-breaker. Overall enrollment increased by more than 2.6 percent (up 737 students) over the previous record of 27,945 in fall 2009. Plus, enrollment in nearly every category also has set records at Iowa State this fall.

A public dedication for Iowa State University's new Biorenewables Research Laboratory building will be held Friday, Sept. 17, at 3 p.m. The new facility is a "front door" to the university's many diverse and broad-reaching programs in biorenewables and is located on the west side of campus between the College of Design and Howe Hall. Construction was made possible through a $32 million appropriation from the State of Iowa. The BRL building completes Phase I of the university's two-phase, $107.1 million Biorenewables Complex.
News release.

A new Iowa State study has found that corn bred to contain increased levels of beta-carotene is a good source of vitamin A. Led by Wendy White (at right), an ISU associate professor of food science and human nutrition, the study is an important step in making biofortified corn available to people from developing countries who desperately need vitamin A in their diets.
News release.

Paul Gigot, the Pulitzer Prize-winning editorial page editor and vice president of The Wall Street Journal, will speak at 8 p.m. Tuesday, Sept. 21, in Stephens Auditorium. Gigot will share lessons he learned from Iowa State journalism alumnus Bob Bartley, longtime editorial page editor of the Wall Street Journal. Bartley, who won a Pulitzer Prize and was honored with the Presidential Medal of Freedom, grew up in Ames and began his career as editor of the Iowa State Daily. Gigot's talk, "The Future of Opinion Journalism," is free and open to the public.

Reggie Watts, a free-form comedian-musician who recently toured with Conan O'Brien, will perform Iowa State's comedy opener on Saturday, Sept. 18. Watts' "Comedy on the Edge" will be at 8 p.m. at Stephens Auditorium, the closing event of Engineers' Week. Watts received the Andy Kaufmann Award in 2006 for his distinctive brand of innovative stand-up performance. The show is free and open to the public. Doors open at 7 p.m.

Pico Iyer, one of the most respected observers of the changing world and author of nine books about cultures converging, will speak at Iowa State on Thursday, Sept. 16. His talk, "Global Souls: Citizens in the Future Tense," will be at 8 p.m. in the Memorial Union Great Hall. The lecture is part of the World Affairs Series. It is free and open to the public. Iyer's books include "Video Night in Kathmandu: And Other Reports from the Not-So-Far East" (which appeared on several lists of the top travel books of the 20th century). His most recent book, "The Open Road," describes 35 years of talks and travel with the Dalai Lama.

The Lied Recreation Center has been closed to facilitate total dehumidification of the facility. More information on facilities, events and ways to give or receive help in the flood's aftermath can be found on the "flood updates" website. 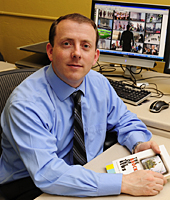 Iowa State Assistant Professor of Sociology Brian Monahan examined media coverage of the 9/11 attacks for his book, "The Shock of the News: Media Coverage and the Making of 9/11." Monahan provides insight on the events of 9/11, which has an anniversary Saturday.
News release.

InsideHigherEd.com
In the latest issue of the Journal of Women and Minorities in Science and Engineering, researchers from Iowa State University's Educational Leadership and Policy Studies program make an additional series of recommendations to ease the pathway in STEM fields from community colleges to four-year universities.
See story.

TIME
Tin-Shi Tam, Iowa State carillonneur and associate professor of music, has gone viral with her rendition of Lady Gaga's "Bad Romance." TIME magazine's blog asks if Tam would would consider a cover of "Thriller." She already has!
See story.
Also see: The Chronicle of Higher Education's TWEED
The Des Moines Register

Take me out to the calculator

symmetry
Kerry Whisnant, a professor of physics at Iowa State University and lifelong baseball fan, studies the ghostly particles known as neutrinos. Growing up in central Illinois, he loved the St. Louis Cardinals and still catches their games when he can. About two years ago, his love of baseball took an analytical turn.
See story.

Eye popping from MTV to the lab

The Scientist
When Song Zhang, a mechanical engineer at Iowa State University, was approached by U2's people last spring asking if the band could use his novel 3D imaging technology for a concert performance, he immediately sent an email to his lab asking: "Does anyone know who U2 is and whether or not we should spend time on them?"
See story.