650 to compete in Iowa LEGO tournament

Iowa's state LEGO tournament will be 9 a.m. to 5 p.m. Jan. 21 at Iowa State University's College of Engineering. Young students will demonstrate their engineering, research and teamwork skills and try to win a spot at the world LEGO tournament. 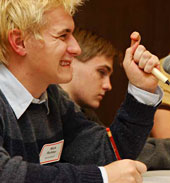 Kickin' it for the Kids

Dance Marathon's "Kickin' it for the Kids" event will be held Jan. 21 in ISU's Memorial Union. More than 500 ISU students who have raised money for the Children's Miracle Network will stay on their feet for 15 hours while meeting central Iowa families that have benefited from Dance Marathon's fund raising.

More on the marathon.