Kevin Nordmeyer, an architect with wide experience in sustainable design, will be the new director of the Iowa Energy Center. Nordmeyer begins his new job March 1. He designed two Iowa State University projects -- the Morrill Hall restoration and the new King Pavilion at the College of Design -- to meet Leadership in Energy and Environmental Design standards.

Iowa State students have set up shop in an off-campus warehouse to build a solar house so powerful it will produce nearly twice as much energy as it consumes. And once the Interlock House is constructed and tested, the students will take it apart, move it to Washington, D.C., reassemble it for competition in the U.S. Department of Energy's (DOE) 2009 Solar Decathlon, and operate it during public tours on the National Mall. For the 75 Iowa State students with 11 varied majors, the past year has been a learning experience like no other.

An etched glass mural titled "River of Milk" has been installed at the Iowa State University Dairy Farm's visitor center. The mural combines dairy production, science and a bit of history.

Iowa State kicked off its annual observance of Black History Month with a Jan. 27 lecture from author Manning Marable, and will continue the celebration of African-American culture with four other events through March 3.

David Peters, an assistant professor of sociology in Iowa State's College of Agriculture and Life Sciences, has studied community poverty rates across the country between 1980-2000. His paper, "The Typology of American Poverty," was published in this month's International Regional Science Review 2009.

Idea of Ecotones to Highlight Department of English Symposium

Writers, artists, scholars and scientists will converge at Iowa State for the 5th Annual Symposium on Wildness, Wilderness & the Creative Imagination, Feb. 8-9, at the Brunnier Art Museum and Memorial Union.

Iowa State economists Peter Orazem and Liesl Eathington agree that the country's economic crisis hasn't hit bottom yet, but they say that Iowa continues to weather the economic storm better than the rest of the nation.

Greenlee School of Journalism and Communication assistant professor Jeff Blevins questions the benefit to consumers of the mandated digital television conversion on Feb. 17, and the government's involvement in the process.

Iowa State researchers Richard Spoth and Max Guyll have authored a report showing that substance abuse prevention programs return nearly $10 for every dollar invested. The report was presented at an international conference, co-sponsored by the United Nations Office on Drugs and Crime and the World Health Organization. 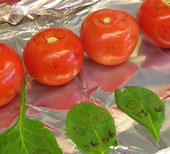 Byron Brehm-Stecher, ISU food science and human nutrition, has developed a technique for testing for the presence of salmonella.

Jill Pruetz, an anthropologist at Iowa State University, helped reunite a nine-month-old chimpanzee that was taken by hunters from her research site in Senegal with her mother.

As in many small Iowa towns, Perry's population of 7,600 is aging, and competition from nearby big cities draws customers, said Liesl Eathington, an assistant economics researcher at Iowa State University.

It's Saturday night at the American Economics Association's conference, and Iowa State University economics professor Peter Orazem has just taken the podium in an overcrowded ballroom at the San Francisco Hilton for The Economics Humor Session.