Tahira Hira, an ISU professor of personal finance and consumer economics, assesses what impact the new Credit Card Accountability, Responsibility and Disclosure Act will have on credit card consumers. Hira is a member of the President's Advisory Council on Financial Literacy.

A hundred ISU faculty and staff recently tested electric-assisted bikes loaned to the university by X-Treme Scooters. The Newton firm offered the bikes to support the university's Live Green initiative and asked that employees ride the bikes to work. Batteries on the bikes give cyclers the option of peddling assistance.

Iowa State's Mini Baja Team is working to improve on last year's 16th-place finish in a contest sponsored by SAE, the Society of Automotive Engineers. Team members think a lighter, simpler off-road racer could help the team move into the top 10. The contest features student-designed and student-built race cars from across the country and around the world.

Work to repair and resurface Stange Road in the vicinity of Veenker golf course is set to begin the morning of Wednesday, May 27. As scheduled, the northbound lanes will be closed for two weeks (May 27 through June 10), with one lane of traffic in each direction allowed on the other half of the road. A one-week hiatus is planned, with the repair work then moving to the southbound lanes for two weeks (beginning approximately June 22). The section of Stange affected is between the Squaw Creek bridge and Blankenburg Drive. Bike paths on both sides of Stange Road will remain open during the project; CyRide bus stops will have temporary relocations. The city of Ames will oversee a similar Stange Road project from Blankenburg Drive to 24th Street and on 24th Street between Stange Road and the railroad tracks to the east. The city portion will begin several days after the university portion begins.

Two Iowa State economists have been studying what the country's economic downturn has meant to workers. University Professor of Economics Peter Orazem assesses how the recession has affected employee wages, while Dave Swenson, an associate scientist in economics, assesses its impact on immigrant, low-wage workers.

ISU benefactors have made gifts and future commitments surpassing $673.1 million to the Iowa State University Foundation during Campaign Iowa State: With Pride and Purpose. This milestone eclipses the private support that was generated during the previous two fundraising efforts combined at Iowa State.

Matthew Sivils, an assistant professor of English, has been named the next recipient of the Gregory L. and Kathleen C. Geoffroy Faculty Fellowship at Iowa State. President and Mrs. Geoffroy established the fellowship in 2005 to support the teaching and research program of an assistant professor in the College of Liberal Arts and Sciences. Sivils’ three-year fellowship begins Aug. 15.

The students of Iowa State's Cyclone Power Pullers are building a four-engine, 1/4-scale pulling tractor for a competition sponsored by the American Society of Agricultural and Biological Engineers May 28-31 in Peoria, Ill. The team finished third overall last year and is hoping for a better, more consistent performance this year. 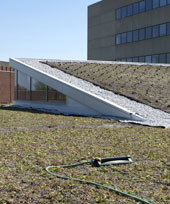 Numerous plants grow on the roof of the Design Center's new addition. The green roof has many environmental benefits.

ISU's Human Development and Family Studies faculty have collaborated with the Government of the Student Body to expand the financial education resources available to students. A new one-credit online course this fall will provide a basic understanding of issues such as budgeting, credit and student loans.

Playing video games can make you a better person

Two studies showing that video games have a bright side as well as a dark one have been carried out recently. One, to be published in June by the Journal of Experimental Social Psychology, was conducted by Douglas Gentile, of Iowa State University's media research laboratory.

An Iowa State University economist said Wednesday that Iowans will likely start seeing positive economic signs as early as next month. Economist Peter Orazem said that while the recession rebound may be starting, it could take a while for everyone to feel the results.

The Conference Board's Consumer Confidence Index jumped to 54.9 in May from 40.8 in April and 26.9 in March. That's the best reading since September. "I don't expect the 'horses to gallop' just yet, but that people are feeling more confident is a good sign," said Tahira Hira, a professor of personal finance and consumer economics at Iowa State University.