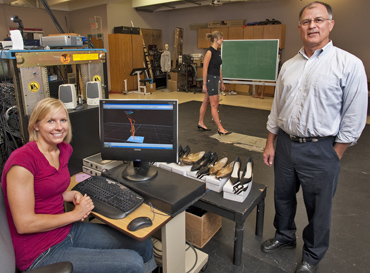 A new study by Danielle Barkema (at left), an ISU kinesiology master's student, has found that prolonged wearing of and walking in high heels can contribute to joint degeneration and knee osteoarthritis. Kinesiology professor and department chair Phil Martin (at right) assisted her in the study, which will be presented, in part, at the annual meeting of the American Society of Biomechanics (ASB), Aug. 18-21, at Brown University in Providence, R.I.
News release.