Lots of food, yell contests, a pep rally, an awards ceremony, and the Oct. 22 game featuring the Cyclones vs. Oklahoma State are part of Homecoming activities Oct. 16-23.

General Mills VP Kenneth Thome will discuss lessons learned from the Pillsbury acquisition in an Oct. 20 talk. Thome is the College of Business fall semester executive-in-residence. 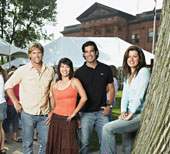