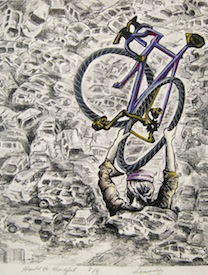 Integrated studio arts graduate student and printmaker Sodam Lee won Best of Show in the Emerging Iowa Artists category at the Des Moines Arts Festival. She'll use her cash award to attend the Venice Printmaking Studio - Emerging Artist Residency in Italy next month. Her work will be part of the Venice Biennale, a major contemporary art exhibition.

Down on the Dairy Farm

Firebrand for science, and big man on campus

AMES, Iowa — As the car pulled into the parking lot of a Starbucks, William Sanford Nye unknotted his trademark bow tie and slipped it off. “This might buy us a couple of minutes,” he said. Roughly two minutes later, before his drink was ready, he was recognized anyway. Two awed young women approached to ask if he was really Bill Nye the Science Guy. Like more than a dozen other college students who would approach him over the next several hours, they asked if they could take a picture with him.

The cutting edge of forensic science

Over a hundred years ago, searching for fingerprints became routine in crime scene investigation. In the intervening years the tools of forensic investigation have greatly evolved. Host Ben Kieffer speaks to Iowa State University Mechanical Engineer Daniel Attinger about his research for the U.S. Justice Department on bloodstain pattern analysis in crime scenes.

Iowa State's Bill Gallus says Tim Samaras, a well-known tornado researcher who was killed along with 13 other people in the EF3 twister which struck El Reno, Okla., was among the top scientists in the field of storm chasing. "I know from our experiences at Iowa State that he was about as safety-minded as you could possibly be," Gallus said.

Professor Emeritus John Schuh is the new director of Iowa State's School of Education. Beginning July 1, he'll serve in the position for two years or until a permanent director is in place.

Associate Professor Matthew Hill and his anthropology students are excavating property in Monona County to learn all they can about bone fragments, charcoal and glass shards believed to have been left by early inhabitants.