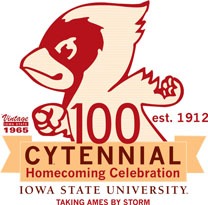 Iowa State's 100th anniversary homecoming celebration -- Cytennial -- is this weekend! Come and see Butter Cy, get in the game as the Cyclones take on Baylor, and check out all the events happening now through Sunday.

The Dandelion Model: Two-step biofuels technologies and the emergence of super-refineries

Can local communities pyrolize their wastes and residues, to make renewable fuels and chemicals at biobased super-refineries? Two-step processes could be the ticket to the future, according to an Iowa State team.

Cy: Even better in butter

Big butter sculptures are usually at home at the Iowa State Fair. But this month, sculptor Sarah Pratt will create a life-sized butter Cy mascot to celebrate Iowa State's 100th homecoming, or "Cytennial." Pratt will sculpt the 300-pound butter Cy Oct. 22 through 26 from 9 a.m. to 3:30 p.m. The viewing window in Kildee Hall will be open from 8 a.m. to 5 p.m. daily and Oct. 27 from 7:30 a.m. to kickoff.

The ISU Dairy Science Club and College of Agriculture and Life Sciences Ambassadors will be on hand from 11 a.m. to 1 p.m. each day greeting guests, selling homemade ice cream and distributing "I saw Butter Cy" stickers.

Is the bacon shortage hogwash?

Bacon lovers needn't worry. There won't be a shortage or bacon rationing; it's just that the drought may eventually push prices up. Even so, says Matt Swantek, Extension swine field specialist at Iowa State, "Bacon prices in the next few months should be quite stable as there is a steady supply of pork going to market and in cold storage."

How rising food prices are impacting the world