An Iowa State University researcher, Stephen Dinsmore, is looking at whether wind turbines have an effect on bird communities and nests and also bats living in the areas surrounding the turbines. They will gauge the impact of existing wind energy projects on birds and bats to better inform the placement of the turbines.

An estimated 1,689 students will receive degrees from Iowa State during winter commencement at 1:30 p.m. Saturday, Dec. 18, in Hilton Coliseum. An estimated 1,319 bachelor's, 256 master's and 114 Ph.D. students will complete their degrees. ISU alumnus Richard (Ric) Jurgens, chairman of the board and chief executive officer of Hy-Vee Inc., will address the graduates.

University Book Store has commencement attire made of 100 percent post-consumer recycled plastic bottles. It takes an average of 23 bottles to make each gown, which look and feel just like those made of traditional polyester fabric. 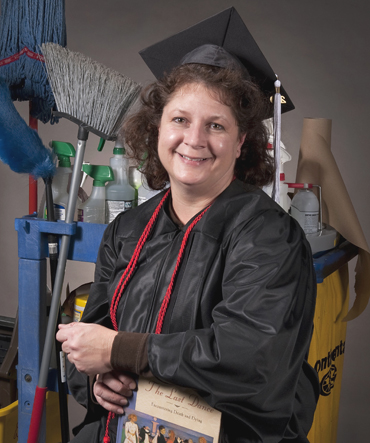 Chris Matteo graduates Saturday from Iowa State with a degree in liberal studies. She also works full-time as an ISU custodian. And part-time as a waitress. And she's rehabbing a 100-year old house in Boone. Did we mention she's a single mother of two teen-age boys?
News release.

A design project by two Iowa State University students took top honors in the student/conceptual category of Contract magazine's 32nd Annual Interiors Awards. The competition recognizes outstanding projects in 15 categories related to interior design. The students completed the design for a sophisticated but romantic South Beach hotel project last spring.They will be honored at an awards breakfast Jan. 28 in New York City, and their work will be featured in Contract's January 2011 Design Awards issue.
News release.

Celebrate the holidays at Reiman Gardens

A 16-foot tree at ISU's Reiman Gardens doubles as a rocket ship, surrounded by a solar system created from donated bowling balls. Volunteers spent months gluing small pieces of glass onto the balls to represent each planet in a colorful, mosaic design. Reiman Gardens' design team has decorated elaborate trees and paired them with gazing balls throughout -- a closing tribute to the 2010 theme "A Celebration of Garden Ornamentation."